The story of the people and values that guided the modern incarnation of Bennett Jones.

ENTREPRENEURIAL FROM DAY ONE

The core values that guide the modern incarnation of Bennett Jones were laid down right from the start. Increasingly preoccupied with his political career, R. B. Bennett understood that the firm’s success would depend on his ability to find and train bright, enterprising lawyers with a strong work ethic. One hundred years later, those same benchmarks guided Bennett Jones’ current chairman and chief executive officer, Hugh MacKinnon, as he set about the goal of establishing the firm’s national profile.

Bennett’s managing partner, Percy Sanford, personified the combination of ambition and grit that has characterized so many Bennett Jones partners through the years. Raised in dire poverty on a farm in New Brunswick, he managed to earn an arts degree at Queen’s University, although, the legend goes, he was so indigent that, on occasion, he fainted from hunger during lectures.

J. J. Saucier joined the firm in 1926 and earlier that same year, he had worked on Bennett’s 1926 federal election campaign. As he later recalled it, “I met the great man, and he said to come see him after the election. By the time I got there, a week or two later, he’d forgotten all about me. But I was able to remind him.”

An understanding was soon reached: Saucier would complete his articles with Bennett, Hannah & Sanford and then look to practise elsewhere. By a stroke of pure fortune, however, a full-time position with the firm opened at just the right moment, and Saucier stayed — for five decades.

As prime minister, R. B. Bennett had the misfortune to inherit the insurmountable challenges of the Great Depression, a global problem beyond his or any government’s ability to ameliorate. In Canada, its effects were compounded by a severe drought that ravaged Western agriculture. Still, he expended several million dollars from his own savings to help Canadian families in need, and was responsible for establishing two foundational institutions of the young Canada: the Bank of Canada and the Canadian Radio Broadcasting Commission, forerunner of the CBC. He also envisaged the idea for the St. Lawrence Seaway but didn’t have the financial resources to bring it to fruition.

R. B. Bennett’s other initial partner, Alec Hannah, might have been lifted from a John Galsworthy novel. A small, stooped, extremely lean man with a prominent nose, he wore high starched collars with a four-in-hand tie in a large knot, and a hard derby hat. Raised in the Scottish Lowlands, he’d been educated by private tutors before entering university and had worked as a solicitor in Scotland before immigrating to Calgary.

Kind and paternal, Hannah was also somewhat idiosyncratic. Because Scottish law was based on codified Roman law, not English common law, Hannah tended to practise according to the former’s precepts. “Alec did it his way,” recalled J. J. Saucier, “and he got remarkable results because he was such a skillful negotiator. He’d start an action no one else would have started, one with no hope in court, and then negotiate a settlement that did better by his client than we did with ours.”

With Bennett in Ottawa serving as prime minister, the torch of leadership by 1930 had passed to Everett J. Chambers, another Maritimer. For much of this period and beyond, the firm became known as the Chambers firm and, then as now, was pre-eminent in the province.

“Chambers came out of the Beaverbrook-Bennett side of Canadian law,” says retired partner John Armstrong. “He was hugely influential, and hugely connected to the establishment, both nationally and provincially. A corporate blue-blood lineage: the big grain companies, CP Rail, big insurers, and banks — that was the mainstay of the firm.” 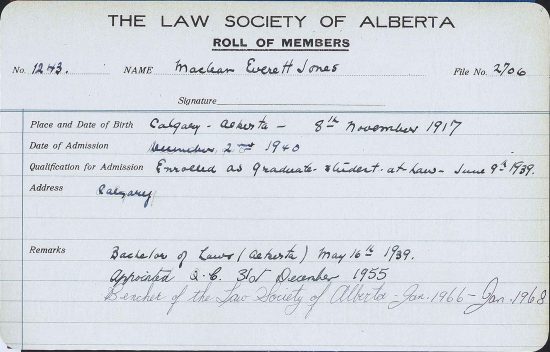