The story of R.B. Bennett and the standards of hard work and client service that are built into the foundations of Bennett Jones.

On a bitterly cold January day in 1897, 26-year-old Richard Bedford Bennett — a strapping six-footer from the Maritimes — stepped off the CPR train in Calgary. Although the history of Bennett Jones would not formally begin for another quarter century, the roots of the firm were planted there, on that station platform, with a welcoming handshake between Bennett and Conservative senator James Alexander Lougheed.

The city’s leading lawyer and one of its most prominent citizens, the overworked Lougheed, then 43, had found himself in need of a reliable junior associate to handle his growing practice.

Raised in tiny Hopewell Cape, New Brunswick — then barely a village of 1,800 — the enterprising Bennett had earned a teacher’s certificate and taught for several years near Moncton, while saving money for law school. He enrolled at Dalhousie in 1890, graduated with distinction, and then practised law.

Lougheed had arranged an interview in Halifax, taking the train across the country for the meeting. Resourceful, hard working, and very intelligent, Bennett appeared to possess precisely the assets Lougheed was seeking. And so Bennett came to Calgary, carrying, as the late John James (J. J.) Saucier told the story, “one hundred dollars and half a ton of books.”

A City of Booms and Busts

The pioneering industrialists of early Calgary were at once hard working and enterprising. In 1912, a group of them pooled funds to launch the Calgary Industrial Exhibition, the original version of what would become the Greatest Outdoor Show on Earth, the Calgary Stampede.

R. B. Bennett was very much a part of its creation and, 10 years later, when the over-leveraged exhibition lost title to its 94-acre parcel, it was Bennett who purchased the property and gifted it back to the city, stipulating that the land be leased to the Calgary Stampede. The deft move helped put the organization on a firmer financial footing, and it was Bennett who handled the legal work. To this day, the law firm he co-founded remains the Stampede’s principal legal advisor — an uninterrupted century of community engagement.

In those early years, Lougheed Bennett was a small firm of 10 lawyers, but it dominated the legal landscape, just as Bennett Jones does today. “They were very well organized,” says retired partner and former Justice of the Supreme Court of Canada Jack Major, “and they had competent lawyers.” They also had Lougheed, a known and respected commodity. A true father of Alberta, he was not only a senator but the only Canadian knighted by King George V — for his work assisting returning veterans of the First World War.

It was no surprise, then, that owners of the town’s major businesses — the largest brewery, the Burns meatpacking plant, Massey farm equipment — all brought their legal work to the firm. “The firm represented all the key institutions, the banks, the Canadian Pacific Railway, and Calgary Power,” adds Major. “There was scarcely a company that did not seem to want them as their lawyer.” And with Senator Lougheed frequently in Ottawa, it fell to the young Bennett to bear the practice’s substantial burden. He quickly built a reputation as a strong litigator, always well prepared and, with his booming voice, forceful in argument. In Calgary, a trial at which R. B. Bennett appeared was considered first-rate theatre. His courtrooms were always full.

R. B. Bennett had briefly held local political office before moving West — with Max Aitken as his campaign manager, he had been elected an alderman on Chatham’s town council — but it was in Calgary where he began to lay the foundations for a political career that would ultimately make him Canada’s 11th prime minister.

Busy though he was, Bennett recognized the vital importance of pro bono community work — a principle that, a century later, remains an essential feature of the modern Bennett Jones. He was one of just five people selected to sit on the first Calgary Public Library board of trustees. He also played a pivotal role in the founding of the Canadian Bar Association of Alberta. For years, Bennett juggled the demands of law, various corporate directorships, his management of both Calgary Power and E. B. Eddy, and his political career. 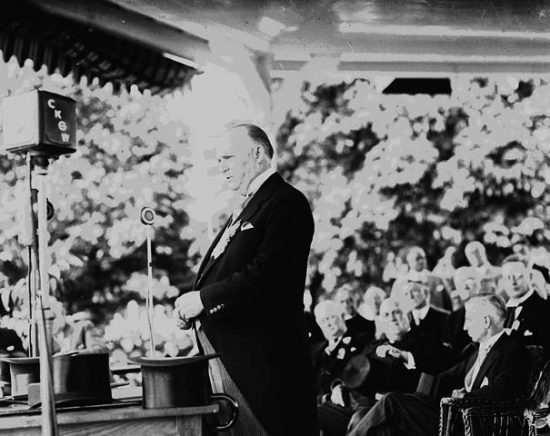